A Teacup Maltese is exactly what the name implies – a really small Maltese dog… 4lb to be precise!

These little pups have very quickly spiked into popularity over the past 20 years. It’s not hard to see why:

But, what is there to know about this teacup dog breed?

Here are nine fun, fascinating and little known facts to peak your interest into the Teacup Maltese dog.

This dog is just a smaller version of the already tiny Maltese.

The American Kennel Club does not recognize the teacup as its own breed, it is officially classified as a small Maltese dog.

As a result, you may find your Teacup Maltese is registered as a Maltese dog with the Kennel Club. However, it is possible that your teacup sized pooch might not be registered at all due to being too small by the breed standard.

The Teacup variant of this dog was actually first seen in the 17th and 18th century, when breeders attempted to make this tiny dog even tinier.

This was done by crossing Miniature Poodles and Spaniels into the line.

In fact, at one point there was thought to be as many as eight different types of dog identified as the Maltese.

However, over time, a breed standard was created and finalised in 1964 and has not changed since then.

It is thought to be descended from Swiss Spitz type dogs, or a relative of the Tibetan Terrier.

In the past, the Maltese has been classified as a member of the Bichon family, but, this is incorrect as the two breed types are distinctly separate.

2. Aristotle Wrote About Relatives Of The Maltese Dog

Hailing from Malta originally, these dogs were very popular among Ancient Greek societies. Greek Philosopher Aristotle is one of the first people to mention “Melitaei Catelli”, an early relative of the Teacup Maltese dog.

Roman poets wrote of a “small white dog”, identified by some historians as an early Maltese type dog.

Over the past ten decades, the Teacup Maltese has been known by many different names – not just Rover or Fido.

Since the breed first came to be in Malta, they have been known by many names. This includes, but, is not limited to:

This long list of names comes from their long history as companion animals.

As you can see from the list these names all have one thing in common; the Maltese dog is a very popular breed, known for its companionship, warmth and generally friendly nature.

4. The Teacup Maltese Is A Royal

The Maltese has been seen on the laps of English Royalty, with both Mary Queen of Scots and Queen Elizabeth I having owned one.

Due to their heritage in the palaces of royalty, the Maltese has been bred eating the best of the best and consequently they are very picky eaters.

They require a diet of approximately 20% protein. However, quality is more important than quality, so it is always better to feed smaller quantities of a high-quality source than lots of low-quality protein.

Fats and oils should be about 5%-10% to help keep your dog’s coat shiny.

Due to their propensity toward developing low blood sugar, it is important that these dogs are fed little and often.

On more occasions than not, they will prefer a high quality, grain free diet.

5. The Teacup Maltese Has a Huge Personality

These teacup dogs stay playful and energetic long after they are puppies.

This dog is at his happiest when playing with his human companions, and he loves to be around new people.

This most likely stems from their origins as a lap dog, their caring nature comes as part of the package.

They love to be curled up on the couch with their human friends. In fact, unlike other small dogs they are unlikely to develop those yappy and snappy behaviors you so often see in other tiny dogs.

However, their smaller size means they may be nervous when meeting new dogs, especially in an environment they are unfamiliar with.

Introductions to new people, places and things should be done at your dog’s own pace, and in most cases the Teacup Maltese will take things in their stride.

Their temperament makes them very easy to train and their people orientation makes them quick learners.

Unfortunately, teacup dogs are notoriously hard to housebreak due to their tiny bladders. This can be corrected with lots of positive reinforcement and patience.

6. White Is The Only Color For a Teacup Maltese

The Teacup Maltese is an adorable small white dog.

They usually stand at about 8 inches tall, and on average weigh 4 or 5 lb. Males and females do not differ massively in size and weight.

According to the breed standard, white is the only acceptable color for this dog to be. All other colors (including bi and tri colored dogs) have been considered unacceptable since 1913.

Easily identifiable by their round faces, black noses and black eyes – the eyes themselves are often described as intelligent. Their black noses can turn pink if they do not get enough sunlight, or if they are a bitch coming into season.

This dog is also considered to be hypoallergenic and so makes an excellent choice for allergy sufferers.

Grooming a Maltese Dog
Most of the time, this toy dog will be clipped into what is known as the “puppy cut”, where the coat is short – less than an inch long.

This type of coat requires very little maintenance, other than brushing every week or so.

To breed this dog, you have to breed together two very tiny Maltese dogs.

Standard size Maltese dogs can only bare up to three puppies safely, so in most cases one or two puppies will be produced for each litter.

However, even one puppy puts incredible strain on the mother, and most of the time these dogs have to give birth via caesarean section.

This level of stress on the mother’s body means that good health care is paramount.

These extra precautions mean that Teacup Maltese puppies cost between $750 and $2,000 USD.

An expensive price tag, and their popularity, makes this breed a favorite for “backyard breeders” and puppy mills. These types of people tend to care more about making a quick buck than the welfare of their dogs.

Avoiding these types of breeders is easy if you know what to look for:

Their enthusiasm for being by your side is contagious, but, great care should be taken as if they get under your feet it is very easy to miss them and for an accident to happen.

On top of this, stairs can be a massive challenge for a tiny dog and an even bigger accident waiting to happen.

Consequently, these dogs are most often seen in houses that are all on one floor, such as a flat or a bungalow.

As playful and loving as these dogs are, it is important that all play around young children is supervised.

Although watching these tiny dogs interact with tiny children is very cute, children and can be quite boisterous and these dogs are so small it does not take much for something to break.

It is therefore imperative that these dogs are treated with care, and so if interaction with a child is essential, it is just as important to teach the child to play with the dog. 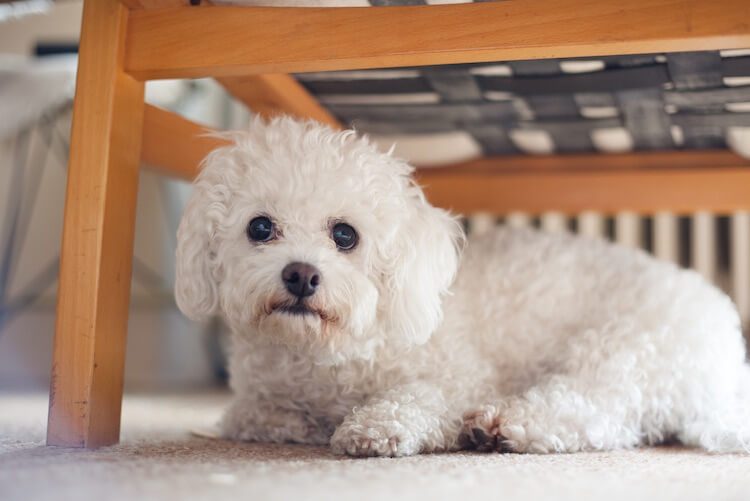 These tiny dogs have a propensity to develop several different health problems.

The most common one is hypoglycaemia (i.e. low blood sugar) – this can cause seizures and even death if not carefully monitored.

To help manage this condition, a teacup dog should eat three or four times a day to help maintain their blood sugar levels.

The Maltese dog is also known for their dental problems.

Owners should be prepared to regularly brush their teeth, use dental chews, and have regular visits to the doggy dentist.

Maltese dogs also are prone to liver, heart and respiratory problems due to its smaller designer size.

Prospective owners of this dog should be prepared for higher than average vet bills, and it is something to consider when looking to purchase one of these pups.

On average a Teacup Maltese lives between 12 and 15 years.

As you can see, the Teacup Maltese is a lot more than just a cute pup in a handbag or a teacup.

These ancient dogs have seen the rise and fall of civilisations and have had many famous owners before falling into your lap.

Although notoriously fussy, they are a loving and loyal pet.

They require high quality diets, eating only the very best and they need a vigilant grooming routine to maintain their beautiful coat.

Whether you own this tiny pooch, are looking to get one, or are just passing through, feel free to leave us a comment telling us your thoughts on this gorgeous little dog.