The ‘bull and terrier’ type was originally developed in England in the early 19th century. The lineage goes back to the mastiff / molosser types, including what we now call the Olde English Bulldogge, that were used for bear-, bull- and horse-baiting from the 12th through the 18th century. This isn’t the bear-baiting we think of today, when hunters feed bears in order to bring them out in the open to shoot them. Rather, the bear, bull or horse was confined in a public arena where the mastiff ‘bulldogs’ would slowly tear them apart alive for the public’s amusement1,2,3,4,5.

The popularity of this ‘sport’ declined as education became more emphasized in urban society of the Industrial Revolution and literacy among the population grew (from about 30% in the 17th century to 62% by 1800)6.  The ‘sport’ was banned altogether by Act of Parliament in 1835.

The lovers of blood ‘sports’ turned to dogfighting to satisfy their fancy, breeding the large, mastiff-type bulldogs to smaller working terriers to get dogs both smaller and more agile, easier to keep and to hide, but just as willing to attack and fight to the death. With the rise of the kennel clubs and the desire to distinguish dogs by looks and pedigree as well as by performance, this ‘bull and terrier’ type eventually divided into many official breeds. They all share the same ancestry and function, distinguishing themselves mostly by slight differences in appearance.

The American Pit Bull Terrier is, like all the ‘bully’ breeds, one of this group of descendants of the British ‘bull and terrier’ type fighting bulldogs. Once imported into the United States, it was bred up to be bigger again, and again used in baiting animals and in dogfighting. The American Kennel Club (founded 1884) was unwilling to register these fighting dogs, so in 1898 the United Kennel Club was founded specifically to register working pit-fighting dogs and to promote dogfighting. In order to be registered, a dog had to first win three pit fights7,8,9. The American Pit Bull Terrier (APBT) became a ‘breed’. As dogfighting declined in popularity in the 1930s and 1940s, Colby (the most famous and prolific breeder of these dogs) began to search for a new market and began promoting the APBT as family pets10,11. This despite the fact that his breeding lines included child killers12. 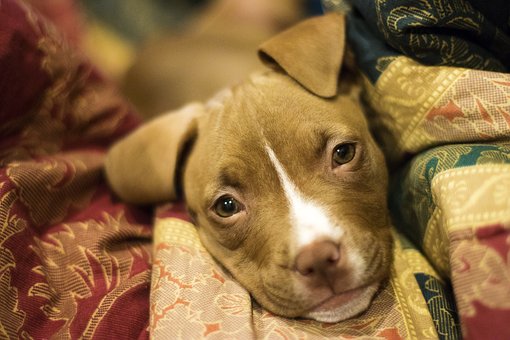 The APBT is of medium intelligence, and it is athletic. They have plenty of energy and exuberance for life. They are affectionate companions are often referred to as a “nanny dog”, which leads many families to believe that they are suitable companions for children. Many can live happily with children and never have an issue, but there are many cases of the family pit bull suddenly attacking or killing a child in the household. The Pit Bull advocacy group BADRAP recently retracted their original “nanny dog” statements (https://www.facebook.com/BADRAP.org/posts/10151460774472399)13. . Most of these children were killed by family pet pit bulls that had never been neglected or abused and had always loved the child. As with all breeds, the traits needed for their original tasks remain in the dogs – in this case, the sudden explosive aggression that was necessary to survive in the fighting pit. Extreme caution should always be taken when this breed interacts with children. They are fun loving dogs that have “clownish” behaviors. Despite, their many positive qualities, this breed may not be suitable for everyone. Their high energy requires a family that can accommodate and appreciate this aspect of their personality. They usually do best with active families. Many American Pit Bull Terriers get calmer as they age and an older dog may work for a more reserved family.

Pit Bull Terriers need regular vigorous physical activity. They crave mental and physical stimulation. Regular long walks and plenty of play time can be ideal ways to burn energy. If their exercise needs are not met, they can develop destructive behaviors. They can often excel at physical activities, such as jogging and weight pulling. Some clubs admit them to agility and fly ball; others don’t because it is dangerous to have APBTs off leash near other dogs and the clubs don’t want to bear the liability in the event of an attack.

The American Pit Bull Terrier needs early socialization and training. Since they are active dogs, they can become unmanageable quickly. They need a firm and consistent handler that can maintain control at all times. They are eager to please and can learn tricks if trained patiently. They are very active both indoors and outdoors. Despite proper training and socialization, many dogs may be hard to manage and can still have unwanted behaviors.

The American Pit Bull Terrier has a history and bloodline deep rooted in the blood sports of animal baiting and dogfighting. As with all breeds, they retain their original traits. They often to do not accept other animals, especially dogs, and can be extremely aggressive towards them. They may accept animals they are raised with, but have been known to kill other family pets even after years of living together happily.

Most APBT puppies get along fantastically with other animals, including dogs. Puppies often love to play with and have companionship with other animals. This often gives owners a false sense of security. As the APBT matures, their relationship with other animals can change drastically. Often dog aggression issues emerge from 1-3 years in age, but some dog’s exhibit aggression as early as 6 months of age. They often will actively seek out other dogs to engage in fighting with and have broken their collars, crashed through windows, and torn through fences to do so, and one recently leaped from an apartment 2nd story balcony, to get to a dog. They can get along with other dogs at times, but things can escalate quickly and they can attack suddenly and for no apparent reason. They often redirect onto humans who try to break up the fight14. Extreme caution should be used with all animal interactions and owners should never be completely comfortable. They can be unpredictable and a dog that plays nicely with dogs for years can suddenly change. Many owners have been shocked to see their beloved pet’s fighting instincts suddenly surface. It is highly recommended that the APBT is separated from other animals in the household when they cannot be supervised15. This is not a breed that is suitable for interactions at off leash dog parks16.

It is recommended that American Pit Bull Terrier owners have and carry a break stick17. A break stick is a device designed to open a Pit Bull type dog’s mouth while it is engaged in fighting. Pit Bull type breeds have a very distinctive fighting style and often will latch on their opponent and not let go. They usually will shake the other animal violently when they are latched on. This can cause horrific damage quickly. The break stick was designed by dog fighters to be inserted into the Pit Bull’s mouth and release his grip. The original purpose was to safely end a dog fight. The break stick often is the ONLY thing that will release the dog’s grip. People have been known to hit Pit Bulls with objects such as a bat or even shoot them and the dog still will not let go. Bully Breed owners should always have one handy in cause of an emergency. The break stick is not safe to use on other breeds of dogs and is only recommended for dogs in the Pit Bull family that were once used for dog fighting purposes.

Research is advised before selecting an APBT as a pet. They are often on the list of dogs that many landlords/property management companies do not allow. There are many American towns that have breed specific legislation or restrictions on certain breeds, including theAPBT. There are also many countries that have enacted restrictions or bans, such as the United Kingdom, that include the breed.  It is wise to make sure your pet will be allowed into your community.

They are also the most commonly euthanized dog breed. Owners are often unaware and unprepared for these breeds. While many families own bully breeds successfully and have only positive experiences with the breed, there are families they are not suited for. Because shelters are so full of APBTs and other Pit Bull types, it’s important to neuter your APBT rather than breeding it – for the sake of the APBTs themselves18. No dog lover wants to breed any kind of dog only to have it quickly end up in a shelter after it’s sold!

The American Pit Bull Terrier requires a minimal amount of grooming and only sheds lightly. They are prone to several medical issues such as hip dysplasia, cataracts, allergies, and heart disease. They usually weigh between 30-70 lbs and their average lifespan is about 12 years.

4. Scott-Warren, Jason.  “When Theaters Were Bear-Gardens; or, What’s at Stake in the Comedy

14. From Pitbullsontheweb.com, emphasis added, last accessed May 2011, the entire site has now been taken down: