The Bull Terrier is a muscular, strongly built dog. It has a well rounded body, and we see a strong back. The head is long and strong and oval shaped to look at. The forehead slopes downwards and joins the muzzle in an even sweeping action. The nose is black. The eyes are small, almond in shape and deep-set, these are dark in color. 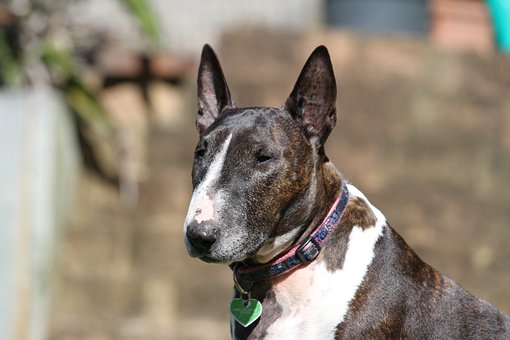 Their ears are small, close together and thin. This breed has a muscular long neck, with sturdy shoulders. Their tail is low set, short and carried horizontally. They have a short, flat, dense and harsh to the touch, coat. Two colors are recognized. These are the white Bull Terrier and colored Bull Terrier.

The White Bull Terrier has colors on their head that are not to be seen anywhere on their body. The colored Bull Terrier may have black brindle, black, brindle, red, fawn and tricolor with white markings.

History of the Bull Terrier: Bulldogs were crossed with Terriers in the 18th century, and become very popular. In the 1830s, combat between Bulldogs and bulls were the height of popularity, this fashion of fighting needed a more agile dog that was not available at the time.

Breeders crossed the Bulldog with the old English terrier, adding Spanish pointer blood, resulting in the Bull Terrier. In 1860, the white coated variety was bred by a dog dealer called James Hinks. This variety soon became popular with the fashion conscious nobles of the time. This dog has been used as a furious ratter and watchdog. The miniature was developed to have the same qualities as the standard. This breed later went on to be recognized by the United Kennel Club in 1948.

Temperaments: The Bull Terrier dog breed is fun loving, active and can be clownish. This is a loyal polite and obedient dog, but becomes fearless and courageous to protect their owners. This dog requires firm consistent leadership with affection throw in to make this a happy family pet. The bull terrier can be fond of grown-up children. It can be too energetic for smaller children. This breed requires exercise daily, firm but fair rules within the home and not to have a meek owner.

Without clear leadership, this dog can become very possessive, joining in quarrels within the home or can become jealous. This breed needs a lot of structure, or they may become destructive. This breed, as a puppy, needs to be well socialized, or they can become extremely aggressive with other dogs. This breed is not recommended to live with other non-canine pets. And it’s best to remember, this breed can be difficult to train.

Health issues: The Bull Terrier’s are prone to dislocation of the kneecaps, skin and flea allergies, kidney failure, zinc deficiency heart defects and can gain weight easily so care has to be taken with quantities of food.
Grooming: The Bull Terrier breed is easy to keep clean and tidy, only occasionally needing a brushing. It is an average shedder, usually twice yearly.

Living conditions: If the Bull Terrier breed has sufficient exercise they can live happily in an apartment. They are fairly active indoors, and do require a small garden.