Description: The Cavalier King Charles Spaniel is considered a toy dog. This dog stands 13 to 18 at the withers and weighs between 10 and 18 pounds.

The Cavalier King Charles Spaniel has a long, silky coat with feathering on the legs, tail, and ears. 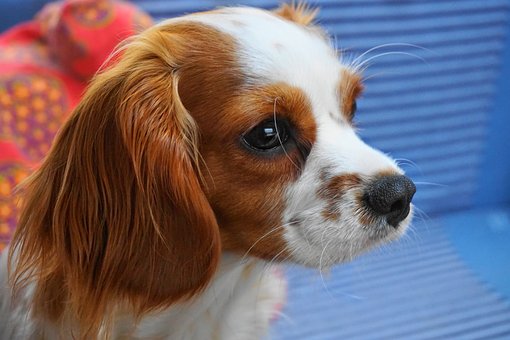 The coat comes in four colors: Blenheim, ruby, tricolor, and black and tan. Although the tail of the Cavalier King Charles Spaniel is usually left its natural length, it is sometimes docked by one third.

This dog can have a life span of 9 to fourteen years. It is also called the Ruby Spaniel or the Blenheim Spaniel.

History: King Charles II of England is most closely associated with the Spaniel that bears his name.

Even as a child, he was surrounded by this breed of dog. After he attained the throne, he promoted the breed and allowed the little dogs the run of the palace.

It is said that the Cavalier King Charles Spaniel even whelped on the royal bed.

This small dog is present in art from the 16th to 18th centuries and was used to help attract fleas as well as its duties as a comforter dog.

However, an American fancier Roswell Eldridge bred the breed back to the more original dog and recreated the Cavalier King Charles Spaniel.

It is a very affectionate and happy little dog that thrives when given attention by its human friends.

This is a very playful dog that wants to please those around it. The Cavalier King Charles Spaniel is an excellent companion for anyone and is trustworthy and gentle with children.

It loves to cuddle and bond strongly to its family.

Health Issues: Although the Cavalier King Charles Spaniel is a fairly healthy toy breed, it can suffer from a variety of inherited health problems.

One of the most serious problems is mitral valve heart disease, which begins as a heart murmur and can become worse as time goes on.

Another serious condition is syringomyelia, in which cysts will form on the spinal column.

This can be a painful condition for the dog. The potential owner of this engaging little dog would be well advised to make sure the dog is purchased from a reputable breeder who has followed intelligent breeding practices.

Grooming: Since the Cavalier King Charles Spaniel has such a long coat, it is important to keep it well-groomed.

The dog should be brushed every day to prevent matting and the hair on the feet should be kept trimmed, especially around the toe and footpads.

The long ears should be checked regularly and kept clean and dry to prevent infections.

Pay some attention to the eyes, too, to make sure they remain infection-free.

Living Conditions: The Cavalier King Charles Spaniel is a house dog. It cannot live in an outside situation, either physically or mentally.

This little dog needs to be around people as much of the time as possible.

The dog will adapt its exercise needs to its owner, so it is suitable for both active and inactive lifestyles.

Regardless of the owner’s exercise needs, however, the dog does need a walk every day. It is very suitable for living in an apartment.