Are you looking for where you can buy a Cheap Teacup Pig? Do you know what a Teacup Pig is?

You’ve come to the right place. I’ve included lots of information below that will help you find teacup pigs for cheap including videos about what you need to know about teacup pigs as well as how to bathe a teacup pig.

Now for the most basic information. What exactly is a teacup pig? 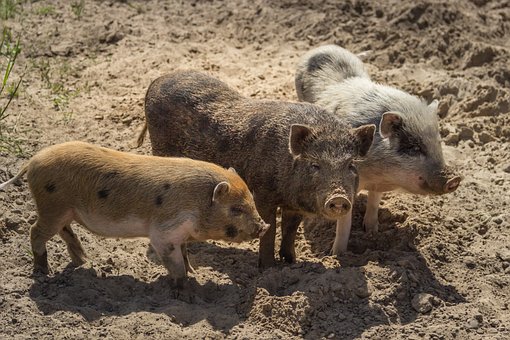 As you may have already guessed, teacup pigs are much smaller than regular pigs.

When they are first born and for a little while after that they can be the size of a teacup. But as with any LIVE Animal Teacup Pigs tend to grow and they grow fairly fast.

As with any pet if the size is the only thing you’re looking for when purchasing a teacup pig then I suggest you purchase a stuffed animal.

That might have got a laugh out of you but seriously you should never purchase an animal-based on size alone.

After all, that is one of the main reasons our animal shelters are filled with unwanted pets.

Teacup Pigs are super cute, fairly easy to train and can be relatively small if the parents are teacup size also.

Weight ranges vary but the Miniature Pot Belly Pig society states any pig under 55 lbs is considered to be miniature in size.

Obviously Teacup Pigs tend to be on the smaller end of the scale but please don’t purchase a teacup pig thinking you’re going to have a pet under 5 lbs.

That’s not even remotely realistic. Do your research by checking out the videos and links below.

I do not endorse any of these but they will give you a better idea of where to purchase a cheap teacup pig and also what all is involved when it comes to caring for a teacup pig.