The Chinese Crested Dog is a smaller (10–13 lbs) hairless breed of dog. Like most hairless dog breeds, the Chinese Crested comes in two varieties, both with and without fur, which are born in the same litter; the Hairless and the Powder-puff.

The Hairless has soft, humanlike skin, as well as tufts of fur on its paws (“socks”) and tail (“plume”) and long, flowing hair on its head (“crest”).

In addition to being an incomplete dominant gene, the “hairless” gene has a prenatal lethal effect when homologous. 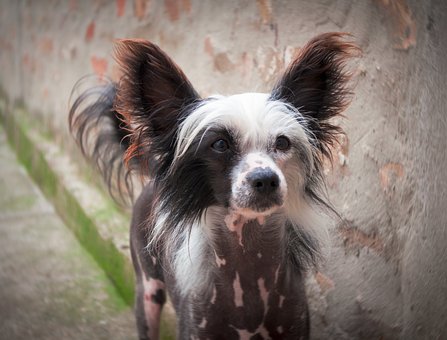 Zygotes affected with double hairless genes (1 in 4) never develop into puppies, and are reabsorbed in the womb. All hairless Crested dogs are therefore heterozygous.

The Hairless variety can vary in amount of body hair. Fur on the muzzle, known as a beard, is not uncommon.

A true Hairless often does not have as much furnishings (hair on the head, tail, and paws).

The difference between a very hairy Hairless and a Powder puff is that the Hairless has a single coat, often with hairless parts on the body, while the Powderpuff has a thick double coat.

The skin of the Hairless comes in a variety of colors, ranging from a pale flesh to black. Hairless Cresteds often lack a full set of premolar teeth, but this is not considered a fault.

The look of the Powderpuff varies according to how it is groomed. When its fur is completely grown out on its face, it strongly resembles a terrier; however, the Powderpuff is usually shaved around the snout as a standard cut.

The amount of body hair on the hairless variety varies quite extensively, from the true hairless which has very little or no body hair and furnishings, to what is called a ‘hairy hairless’, which if left ungroomed can sometimes grow a near-full coat of hair.

These hairy hairless are not a mix between powderpuffs and hairless Chinese Cresteds though, but is merely a result of the varying expression of the hairless gene.

The mutation responsible for the hairless trait has been identified. One famous Chinese Crested dog was the hairless purebred named Sam, who was dubbed the “World’s Ugliest Dog” in competition from 2003 to 2005. He died before he could compete in 2006.