The Chinese Shar-Pei, an ancient and unique breed, is thought to have originated in the area around the small village of Tai Li in Kwangtung Province and has existed for centuries in the southern provinces of China, apparently since the Han Dynasty (c. 200 B.C.).

Statues bearing a strong resemblance to the Shar-Pei have been discovered and dated to this period.

More recently, a Chinese manuscript of the 13th century has been translated; it refers to a wrinkled dog with characteristics much like those of the Shar-Pei.

The name “Shar-Pei” itself literally means “sand-skin”, but translated more loosely as “rough, sandy coat” or “sand-paper-like coat” and refers to the two distinctive qualities of the Shar-Pei coat – roughness and shortness – which make the breed unique in the dog world.

The Shar-Pei shares another distinctive characteristic with only one other breed, the Chow-Chow, in having a blue-black tongue, which may indicate an ancestor common to both breeds. However, proof of such a relationship is difficult. 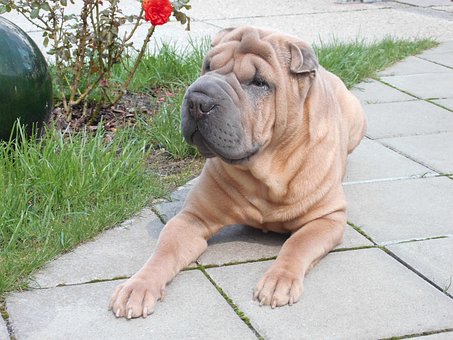 The history of the Chinese Shar-Pei in modern times is incomplete. However, it is known that following the establishment of the People’s Republic of China as a communist nation, the dog population of China was essentially eliminated.

No dogs were seen in the cities, and few dogs remained in the countryside. During this period a few Chinese Shar-Pei were bred in Hong Kong, BC and in the Republic of China (Taiwan).

Originally a multipurpose Chinese farm dog, many of the breed’s characteristics relate to that work. Their moderate sound structure allowed them to be perimeter guard dogs, working all day.

They have retained vermin catching, herding, and tracking skills, as their role on the farms was diverse.

Physically, the Chinese believed the breed’s scowl and the black pigmented mouth would scare off evil spirits and their imposing presence meant that most were never challenged.

In relation to the Standard of the Breed, no one solid coat color is preferred to any other solid color.

The variations in coat colors, as described below, do not alter the color requirements/preferences as described in the Standard of the Breed.

Cream An “offwhite” color. May have darker ears and shading along the dorsal line. May be described as light cream, cream or dark cream.

Sable A lacing of black hairs over a lighter ground color. Two separate colored hairs – one black and one a lighter color (not white). The coat color is uniform over the body, neck, head, and legs. Very little variation.

Fawn A very light tan/golden color ranging to a dark tan/golden color. Some fawns with dark fawn coats have a pronounced red tinge. May have darker shading along the dorsal line.

Red fawns may have lighter colored skin, eyes and toenails. They should have a solid colored nose and footpads. May be described as a light fawn, fawn, dark fawn or red fawn.

May have a blue, grey, brown or red tinge on the sides. The coat color is uniform over the body, neck, head, and legs.

Very little variation. May bleach, fade or brown from exposure to the sun.

Brown A medium to dark brown color. The coat color is uniform over the body, neck, head, and legs. Very little variation.

Group B Dilute Colors. No black (charcoal) pigmentation anywhere on the dog. Skin, nose, and nails are self-colored blending with the coat color.

Eyes may be light or dark. Tongues may vary light to dark lavender.

Cream (Dilute) An “offwhite” color. May have darker shading on the ears and along the dorsal line.

May be described as light cream, cream or dark cream. Chocolate (Dilute) A medium to dark color (for example Hershey milk or dark chocolate). The coat color is uniform over the body, neck, head, and legs. Includes liver.

Apricot (Dilute) Similar to but lighter in color than a five-point-red (dilute). A distinct apricot color ranging in shades from light to dark apricot. Sable (Dilute) A lacing of dark-colored hairs over a lighter ground color.

Two separate colored hairs – one dark (red, brown, silver) and one a lighter color (not white). The coat color is uniform over the body, neck, head, and legs. Very little variation.

The nose is slate. Mouth/tongue is lavender. Skin, eyes, footpads, and nails are self-colored.

A bluish/silverish smoky color. The coat color is uniform over the body, neck, head, and legs. Very little variation. The nose is slate. Mouth/tongue is lavender. Skin, eyes, footpads, and nails are self-colored.

Brindle A fine mixture of black hairs with hairs of a lighter color, usually tan, brown, or grey with typical tiger stripe pattern.

These patterns or variations may appear in other color combinations.

Parti-Color Variegated in patches of two or more colors.

An alert, compact dog of medium size and substance; square in profile, close coupled; the well-proportioned head slightly, but not overly large for the body.

The short, harsh coat, the loose skin covering the head and body, the small ears, the “hippopotamus” muzzle shape, and the high set tail impart to the Shar-Pei a unique look peculiar to him alone.