Description: The Cocker Spaniel is a dog of small to medium size. The dog will stand between 14 and 16 inches at the withers and weigh between 15 and 30 pounds regardless of sex.

This dog has a long, silky coat, and the colors include red, black, beige, black and tan, and particolored. The tail of the Cocker Spaniel is docked. It is an active dog, that enjoys exercise. The Cocker Spaniel can live for 15 years or more.

At that time, the size of puppies from a single litter could vary greatly, with the smaller ones being used as ladies’ lap dogs and the larger ones for hunting. 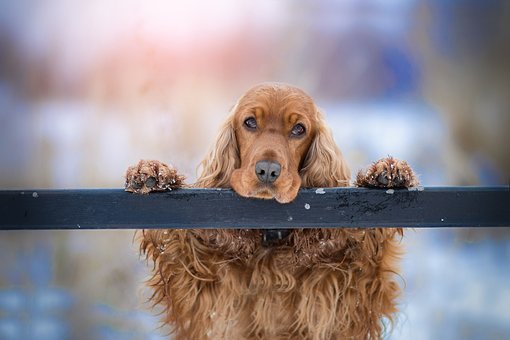 The name Cocker refers to the dog’s use as a hunter of woodcocks. As time went on and the dog made its way to America, it became a breed separate from its immediate parent, the English Cocker Spaniel.

The hunting instincts bred into the Cocker Spaniel from the beginning are still present, but it is used mostly as a companion dog now.

Temperament: The Cocker Spaniel makes a reliable, gentle companion. This is an enthusiastic dog that enjoys the company of its human family.

It is good for people of all ages and aggression should never be a problem. In fact, if the fault could be found with the character of the Cocker Spaniel, it would be that it can tend to shyness.

This can be overcome by introducing it to more people and animals. To remain sound and happy, the Cocker Spaniel requires plenty of attention and affection.

Health Issues: Although generally healthy, the Cocker Spaniel can be subject to several health issues, one of which is very serious. The most life-threatening is Immune-Mediated Hemolytic Anemia, which causes severe blood loss as the immune system destroys the blood.

It can sometimes be treated medically. The Cocker Spaniel can also develop cataracts and entropion. It can suffer from hip dysplasia and problems with a shifting kneecap.

Grooming: The long coat of the Cocker Spaniel requires daily grooming to prevent matting. The owner should brush out the coat every day, and the dog can be bathed fairly often.

The long ears can encourage infections, so these should be cleaned and dried every day. If desired, the coat can be clipped to a more manageable length. The eyes of this dog are sensitive and should be cleaned with a damp cloth.

Living Conditions: The Cocker Spaniel should live in the house with its family. This dog is not suited for life in an outdoor kennel, physically or mentally. The Cocker Spaniel enjoys the company of humans and wants to interact with them.

It is playful, but not rambunctious, in the house and can also serve as a watchdog. Apartment living is fine for the Cocker Spaniel as long as it gets exercise in the form of walks or plays sessions every day.