Description: The Dingo has things in common with the Indian Pariah dog and the South-East Asian dog. The head is broad and they have a pointed muzzle. They have erect ears that are forward-facing and triangular in shape.

The eyes are yellow over an orange color to brown. The height as an average is 20-24 inches and 28-44 pounds in weight. The dog tends to be bigger than the bitch. The tail is low set and saber in shape.

The coat is short and is bushy on the tail. Most are bicolor and have small flashes of white on the muzzle, chest, and legs with the paws being the most common.

Colors we see are in the sandy to the reddish-brown range but you can get tan, and more rarely black. The coat’s thickness depends on the time of year. 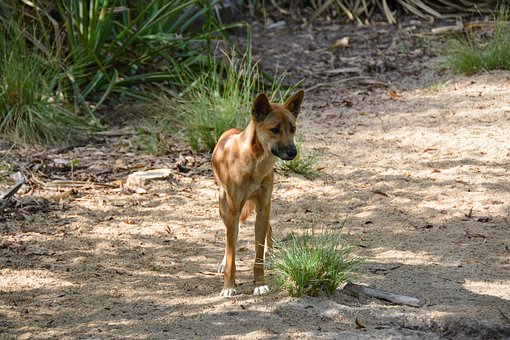 There is also a dance by the Aborigines in the area of Kimberley, which is a coastal area, of dogs running excitedly up and down a boat and then jumping off into the water.

There are recorded reports of wild dogs in Australia. from a Captain Dampier in 1699. The Dingo numbers seemed to have increased in the 1880s, reaching a peak from 1930-1950.

After this time the numbers have stayed high but there are more Dingo-hybrids rather than the earlier Dingo. The pure breed Dingo is thought to be widespread in Northern, Northwest and Central Australia.

There has always been friction in the areas where sheep farming is done and in part, this has been helped by Dingo fencing.

It is thought that the Dingo dog has caused the extinction of the Tasmanian Devil from mainland Australia. Today they are seen as native Australian fauna.

The Dingo was classed as vulnerable on the Red List of Threatened Species in 2004. In 1994 the Dingo was recognized as Australia’s national dog.

Temperament: There is divided thought on the idea that a Dingo can be a pet or working dog. There is some thought that for the pure Dingo to survive it will need to become domesticated.

They are very tame with good contact with humans and have done, such as with the indigenous Australians and early European settlers.

Some are shy and not aggressive but you can have the other extreme where these dogs are very aggressive and completely uncontrollable.

So much depends on how the dog has been raised and if handled well as a pup. They are intelligent and affectionate but need such vast space they become impossible for the normal dog owner.

They are affected by the heat and become very hard to handle in hot weather. The role this dog needs is one of use, and they have to see a point to the task such as a shepherd dog. They can be potty trained.

There is the Australian Native Dog Training Society that was set up in 1976. This at first was illegal, as ownership of dingos was forbidden.

Today there are clubs both in Australia and the USA that breed the Dingo and if this is a dog that you may wish to have it is highly recommended that you seek out these clubs to find out what will be required to own this special dog.

They are very independent and with age may become more aggressive. There is also debate that the owner can not give the Dingo what it needs.

Health issues: The Dingo can have Echinococcosis, parvoviruses, canine distemper, hepatitis, and more so good health checks are very important.

Grooming: This is really not known but as a pet, they can be heavy shedders and grooming at this time can keep the coat free of dead hair.

Living conditions: They are naturally wild so cover a large area that can have many different terrains. In captivity this is a special breed and help over their requirements is needed. They are not suitable for an apartment.