Dobermans are most recognizable as being black and tan in color but they can also come in blue and fawn but these colors are disqualifications in dog shows, there is also a rare white (albino) Doberman.

They are a medium to the large dog standing up to 20 inches tall, although there is no strict standard weight, they should not weigh more than 110lbs and should not weigh less as their size can determine their strength.

They have long, straight and muscular legs that should be parallel and strong, they also have a long neck and face, by breed standards they should also have the characteristic spots above their eyes, which look almost like eyebrows. Their coat should be short and glossy to look at.

Dobermans are very elegant to look at, and often have their tails docked and their ears cropped which have come to be part of their most well-known characteristics. However, in most countries, both these practices have been banned. 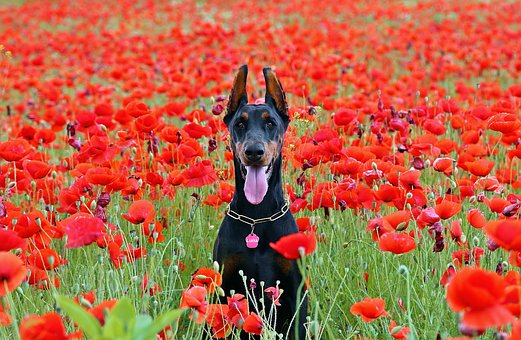 History. The Doberman to this day is credited to a man named Louis Dobermann, he was a tax collector in Germany and developed the breed to use as his guard dog, he used a verity of dogs that each had unique traits that he wanted for his ‘new’ dog.

Although which breeds he used for certain are not completely known, it is known that he used a Rottweiler, a Great Dane, a Manchester Terrier, a Greyhound, and the German Sheppard. There are also a few other breeds thought to be in the Dobermans heritage but it’s not certain.

Louis Doberman first started work on the breed in the late 1800s and in 1889 they were officially recognized by the German Kennel Club. They were often used as police dogs and also tracking dogs, the breed developed in America after the 1st World War as many American soldiers became so attached to the breed they took them home with them.
Temperament. Unfortunately, Dobermans have a reputation for being an aggressive attack dog, however, this is not the dog’s fault and the blame for an overly aggressive Doberman usually lies with the owner.

They are not the right dog for a first-time dog owner, however if given proper training and exercise, they can be wonderful dogs. They are highly intelligent and several studies have shown that they are in fact one of the most trainable dogs.

They are protective animals and love to please their owners, they can often become a one-man dog, choosing preference to one person over all others and forming a close bond.

They can be very excitable at times, so they need a handler who can be in control and let the dog know who’s in command, though as with all dogs you should never be aggressive or abusive to them.

They need to start training from a young age and need to be kept active, if they are not well trained they can develop behavioral problems which has led to them being stereotyped as an aggressive dog. They can also become highly distressed if left alone for too long.

Health Issues. Dobermans have been proven to suffer from the prostatic disease more than any other breed, they can also suffer from hip dysplasia and Willebrand’s disease, Willebrand’s is a genetic disease that causes a bleeding disorder, there is genetic testing that can be done to check all Dobermans for this disease. They are also very susceptible to the cold so should be kept warm.

Grooming. Dobermans require very little grooming as their coat is so short, however a good brush once a week will help to remove loose or dead hair and also encourage the skin to produce their natural oils that keep the coat healthy and shiny.

Living Conditions. The Doberman is best suited to somewhere with a medium-sized garden, however, they could live in an apartment, as long as they have good regular exercise. They can be good with other animals, although this is not always true so it wouldn’t necessarily be a good idea unless they were raised together.