The American Eskimo is built along classic Nordic lines, a form that has proved effective at pulling heavy loads through snow and ice.

It is compactly built, slightly longer than tall. The stand-off, double coat resists soaking and provides insulation against the cold.

The small thick ears are also cold-resistant. The breed’s smaller size has moved it from the realm of sled dog, but it remains a sled dog in miniature.

The American Eskimo Dog stands furry with erect ears and a long tail curling over its back.

Dogs over 19 inches or under 9 inches are disqualified at breed shows in the US and Canada, in order to discourage the breeding of oversize or excessively small dogs.

The United Kennel Club in the US does not recognize the Toy variety. 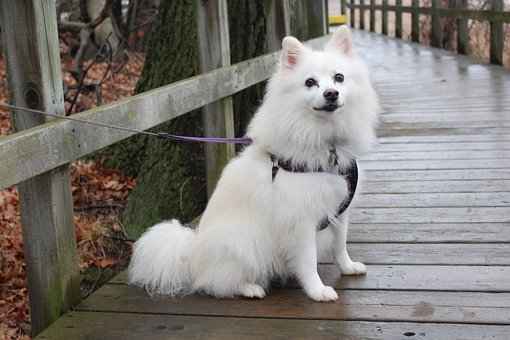 Intelligent, alert and friendly, the American Eskimo Dog is also an excellent watchdog, protective of his home and family.

The Eskie learns quickly and is eager to please his owner, but requires daily exercise. Their voluminous coat sheds and needs to be brushed and bathed on a regular basis.

Evidence suggests that “White Spitz” dogs were first brought to the United States by German settlers and despite the name, have nothing to do with the Eskimo culture.

The name came about in 1913 when Mr. and Mrs. F.M. Hall first registered the breed with the UKC (United Kennel Club).

American Eskimo Dogs are white, or white with biscuit, long haired, double coated dogs with triangular ears held erect and a plume-like tail carried over the back.

There are three established sizes: the standard, the miniature and the toy. Standard Eskies can range from 15″ to 19″ tall at the shoulder.

The American Eskimo Dog is often called “Spitz”. In America, “Spitz” is not a breed of dog, but rather a group of breeds, like retriever or spaniel, with similar characteristics.

The preferred nickname for the breed is “Eskie”. Other Spitz breeds include the Keeshond, Finnish Spitz, Siberian Husky, Shiba Inu, Samoyed and the Pomeranian.

The Eskie is one of the most intelligent of all dog breeds. They are very curious. They will examine changes in their environment with a very wary, yet inquisitive eye.

They always seem to know when a family member needs to be cheered-up or to simply be loved. Anyone who has ever had an Eskie hug them truly understand their unique ability to love.