Life span: 10-12 years. The Auzawakh is Rangy, leggy, lean, rugged, and elegant, the Azawakh is extremely high-stationed, taller than it is long.

Its back length should be 90 percent of its leg length to withers (shoulder blades). It has a deep chest, which should not go below the elbows, and a high tuck/waist. 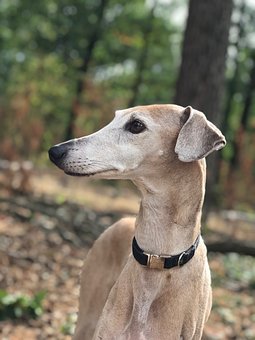 The coat is very short and almost absent on the belly. Its bone structure shows clearly through the skin and musculature. Its muscles lie quite flat, unlike the Greyhound, and in this respect it is closer to the Saluki.

Colors permitted by the FCI breed standard are clear sand to dark fawn/brown, red and brindle (with or without a dark mask), with white bib, tail tip, and white on all feet (which can be tips of toes to high stockings).

Currently, white stockings that go above the elbow joint are considered disqualifying features in France, as is a white collar or half collar. Many other colors occur in Africa such as black, blue fawn (that is, with a lilac cast), grizzle, and blue.

The Azawakz in its native land also comes in parti-color. Blue brindle is also found in about 0.5% of the population; this is a normal recessive gene which again does not meet current FCI standards.

The Azawakhs light, supple, elastic gait is a notable breed characteristic, as is a ‘bouncy gallop’.

Uncommon for a large breed, Azawakhs have no known predisposed genetic diseases (such as hip dysplasia).

Azawakhs need to be well socialized from an early age and should be challenged with new situations.

They are a combination of a sprinter (though not anywhere as fast as a Greyhound) and a long distance runner (like a Saluki).

Therefore they need a good to high level of exercise and should have regular runs off lead in large enclosed areas to run off steam.

Temperament: It manages to balance a close bond with its owner with a strong, almost feline independence. They are attentive yet aloof. With those they accept, Azawakhs are gentle and affectionate.

With strangers they are reserved and prefer not to be touched, but are not aggressive.

Although raised to protect livestock, they do not have native aggression toward canine nor human unless they perceive them as a threat.

Azawakhs have the unique ability to recognize other Azawakhs on sight, and bond naturally with members of their own breed.

History: Azawakh among the TuaregBred by the Tuareg, Fula and various other nomads of the Sahara and sub-Saharan Sahel in the countries of Mali, Niger, and Burkina Faso, the breed is used there as a guard dog and to hunt gazelle and hare at speeds up to 40 miles per hour.

The Tuareg historically have been very stern toward them and think of them as only slightly more important than dirt, which has accentuated the breed’s ruggedness and independence.

Unlike some other Afro-Asian sighthounds it is more of a pack hunter and they bump down the quarry with hindquarters when it has been tired out.

In role of a guard dog, if an Azawakh senses danger it will bark to alert the other members of the pack, and they will gather together as a pack under the lead of the alpha dog, then chase off or attack the predator.

The Sloughi, by comparison, is more of an independent lone hunter and has a high hunting instinct.

They are relatively uncommon in Europe and North America but there is a growing band of devotees. There are estimated to be less than 200 Azawakhs in North America.

It is very feline in temperament and therefore not a good pet for mainstream owners. It will not fetch. However, well socialized and trained, they can be good with other dogs, cats, children, and strangers.

The breed is not yet registered by CKC or AKC (but is recorded in AKC’s Foundation Stock Service); it is registered with UKC, ARBA and others.