Description: The Bloodhound is considered to be a large type of hound. The dog will weigh between 90 and 110 pounds, and the bitch 80 to 100 pounds.

The Bloodhound is recognizable for its wrinkled head, long ears, and soulful expression. 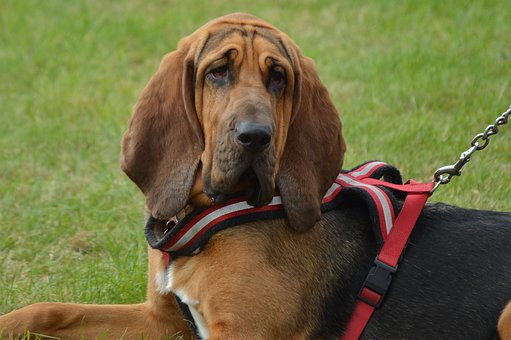 The coat of the Bloodhound is short and has a hard texture and is predominantly liver and tan, black and tan, or red. The Bloodhound has a life expectancy of 10 to 12 years.

This dog is also known as the Flemish Hound, the St. Hubert Hound, and the Chien de Saint-Hubert.

History: The Bloodhound is an ancient breed, dating back over 1,000 years. The Bloodhound probably originated in France, but was perfected by the Monks of St. Hubert in Belgium.

The name Bloodhound refers to the purity of its blood, not to any vicious qualities. The Bloodhound was taken to England during the Norman Conquest and was a favorite breed with the royal house for years thereafter.

The Bloodhound was used primarily as a hunting dog for stags. Gifts of Bloodhounds were given to the Kings of France by the monks from Monastery of St. Hubert.

Later, the exceptional nose of the Bloodhound was used in tracking criminals and lost children.

Temperament: Despite popular literature, the Bloodhound is one of the sweetest natured dogs.

This dog is calm and gentle and can be trusted with children. Actually, the Bloodhound will sometimes have to be protected from children that want to play too vigorously with it, as it will not protest against harsh treatment.

The Bloodhound loves to be in the midst of its family, interacting with them and receiving attention. It is a loyal and devoted dog that is mild and patient.

Health Issues: The Bloodhound is a dog that is quite susceptible to bloat and care should be taken to do everything possible to prevent this condition.

Feed the dog 2 or 3 small meals a day, rather than one large one and keep the dog inactive for an hour after eating.

If your Bloodhound does develop bloat, take it to the veterinarian immediately. Bloat is a life-threatening condition.

Grooming: As the Bloodhound has a short coat, a good brushing once a week will serve to keep it in good condition.

As the Bloodhound has a rather strong ‘doggy odor’, the owner might like to give it a dry shampooing once in a while.

The ears of the Bloodhound should be checked daily to make sure they are clean and dry.

The pendulous ears make it easy for infections to begin.

Living Conditions: The Bloodhound is an affectionate dog and will do best in the house with its family, even though it is able to live outside.

This dog is capable of living in an apartment if it is given sufficient exercise. The Bloodhound is a dog that loves to follow a scent and should be allowed to work off some energy in a daily walk.

Description: This is a large, if not, massive hound. The back of the dog is very strong. We see a long head that is fairly narrow, in proportion to the body.

The muzzle is long and the nose is large and black. The eyes are large with the lower lips of the eyes being dragged downward and turning outward.

The eyes are deep and colors vary from yellow to a deep brown. They have thin drooping ears that add to the total caricature of the dog, these are set low.

The Bloodhound has copious amounts of baggy skin, with even more around the head and neck.

It has strong, muscular legs that are straight. The tail is high with a slight curve that can be seen over the top of the top line. Their coat is wrinkled but short.

It is hard to the touch, but has softer hair on the ears and skull. Colors are liver and tan, black and tan and red and tawny. There can be a small amount of white on the feet, chest and stern.

History: This is a breed that is over 1000 years old. It was perfected by Monks of St. Hubert. Later this breed was brought to England by the Normans and from there they have gone global.

It has been known as the Flemish Hound. This dog lives to hunt but is not a keen killer.

Tracking is a firm favorite with this breed, and they have been used for tracking criminals, slaves that have run away and the odd lost child but mostly they have and are still used as a tracker for animals.

Temperament: This is a loving dog that shows patience, gentleness and is a well mannered dog.

This is a good natured dog and can even tolerate very young children climbing over them, not that this gentle nature should be taken advantage of.

With its wish for lots of attention, it still manages to hold on to its independence and determination.

This breed needs firm but gentle handling at all times. Good leadership is a must.

The male dogs go through a teen patch, where you will have to hold your ground. Regarding training this dog is not top of the class and basic obedience is all you can ask for.

Clear reinforced rules work well, beside great leadership from the owner. Socializing this dog is important as well as long daily walks.

This breeds tracking is so good that it is admissible in a court of law. They have been used to track children that are lost, and the odd criminal as well.

Holding this great skill in mind when you are out walking, as keeping this breed on a lead is a must.

Health issues: This breed can get bloat, so feed this dog in small meals a few times a day. Hip dysplasia can happen. Entropion with the eyes and ear infections.

Grooming: This coat can be looked after with a hound glove, bathing only when really necessary.

You have to clean the ears well and regularly. This dog has a distinctive smell that is just part and parcel of the breed.

Living conditions: This breed will do well in a flat but only if you really walk them well. It is best to have a garden that is well fenced for this breed.

Please do your own research to see if the dog breed, breeder or rescue organization is reputable and the right fit for you and your family.

Keep Checking Back For New Breeders and Rescue Listings.
Some of the Cities that we plan to include Puppies For Sale and Rescue Organizations are listed below.

If you are located in this state and would like to be listed in our Breeder and Rescue Directory please contact us.