The choke collar is a length of metal-link chain with a large circular ring on either end. The chain is slid through one of these rings and it is slid over the dog’s head. When the dog displays an undesirable behavior the collar is tightened. This is primarily used in traditional dog training.

The prong collar is made of metal links that fit together by connecting through long, usually blunt, teeth that point inward toward the dog’s neck.

A section of this collar is made of a loop of chain links that tighten the collar when pulled, pinching the dog’s neck.

The use of these collars is controversial and is opposed by animal rights groups such as PETA. This collar is mainly used in traditional dog training.

Some dog training organizations will not allow members to use them PAACT. 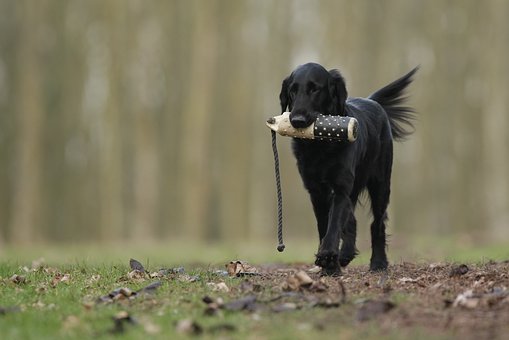 Radio-controlled Collars These consist of a radio receiver attached to the collar and a transmitter that the trainer holds. When triggered, the collar delivers an aversive.

The specific aversive varies with different makes of collars. Some emit sounds, some vibrate, some release citronella or other aerosol sprays, some apply electrical stimulation.

A few collars incorporate several of these. Of these, electrical stimulation is the most common and most widely used.

Early electrical collars provided only a single, high-level shock and were useful only to punish undesirable behavior.

Modern electrical collars are adjustable, allowing the trainer to match the stimulation level to the dog’s sensitivity and temperament.

They deliver a consistent and measured level of aversive stimulation that produces significant discomfort and startle without risk of producing permanent physical injury.

Many of the manufacturers realize that these collars can be used to treat aggression when used correctly. They specifically recommend against merely correcting the dog when he shows aggression.

The martingale collar is a collar that has only a section on it that will tighten when pulled. It consists of the main collar piece, as well as a smaller chain or fabric loop where the leash attaches.

This is different from the choke collar that will tighten indefinitely.

While they are now mainly used as a training collar, they were originally called Greyhound collars and used on breeds such as Sighthounds whose necks are as big around like their heads and can easily slip out of a flat buckle collar.

The chain loop allows the collar to be loose and comfortable but tightens if the dog attempts to back out of it.

The no-pull harness is worn on the body of the animal. The no-pull harness differs significantly from the standard harness since it makes it harder for the dog to pull because it distributes energy over the dog’s back and shoulders.