The Dogo Argentino is also known as the Argentineans Mastiff and the Argentine Dogo. Here is a large dog that is 24-27 inches in height. Its weight is 80-100 pounds. This is a well-muscled dog, and it has a deep chest. The head is large and rounded in shape.

The muzzle is concaved upwards slightly and is the same length as the skull. The Dogo Argentino jaws are powerful and their teeth meet in a scissor bite. The nose is black. 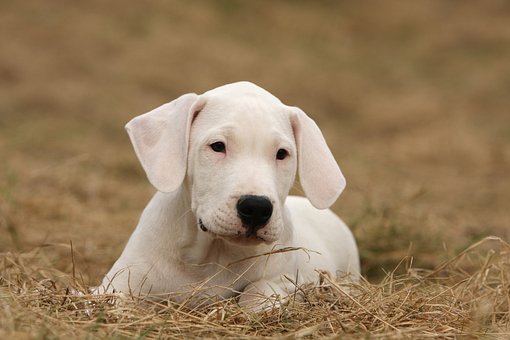 With eyes that are wide apart and these are dark brown, hazel or light brown in color. Eye rims are either pink or black. The ears are cropped, in countries that permit this, to get them to stand erect and are triangular.

They have a short hock but the thighs are exceptionally muscular. The tail is thick. The Dogo Argentino coat is single and this is thick and shiny. The coat is white. Some clubs do accept black spots on the head called Pirata but this is not all clubs. This dog lives to about 12 years.

The Dogo Argentino breed was developed by two brothers from Argentinean Dr. Antonio Martinez and his brother Agustin. They wanted a good companion dog that could hunt, and guard, as well.

Contributing to this breed is the Boxer, Bulldog, Pointer, Great Dane, and Spanish Mastiff along with other breeds. The result was a fearless hunting dog with good stamina.

Sadly, in the UK this dog was used for dogfighting and this lead to the national legislation of dog control in public. This led to the 1991 Dangerous Dogs Act and led to the ban, of this dog, in the UK.

Dogs that are alive before the ban have heavy restrictions placed on them including being muzzled when in public on a lead at all times and only handled by an over 16-year-old, at all times.

The Dogo Argentino owner has to have full insurance as well. This is down to bad human handling rather than a dog that is really that bad. Their talents are in watchdog, guarding, police work, military work hunting, and tracking.

Here is a really loyal dog that is a great guardian for the family and home. This dog has high intelligence, with a lot of power. The Dogo Argentino dog is a good working dog, which needs an experienced owner that has good skills as a pack leader and understands dog physiology.

Setting rules that the Dogo Argentino has to follow, is vital. Training must be firm and fair to this dog allowing the dog to know its place within the family pack. Problems will happen with a meek owner or someone who doesn’t understand how to lead properly.

Problems that can happen are a Dogo Argentino dog that is aggressive towards other dogs. Socializing this dog early and well is very important. They are good with other pets they are raised with.

Training from an early age is also important to gain leadership status. This dog has lots of energy and so will need exercise daily.

Due to this dog having a single coat grooming is easy, and they only need brushing occasionally. A Dogo Argentino has no doggy smell and is an average shedder.

The Dogo Argentino can live in an apartment providing that they have enough daily mental and physical exercise. They will prefer an average size garden.