The Dogue de Bordeaux, also known as the French Mastiff or the Bordeaux Bulldog, is a relatively large and stocky dog. They have a large head that is very broad, they have a large nose and wide-set eyes. Their large cheeks and loose skin around their face and neck give them their characteristic droopy-faced and wrinkled look.

They have a large and deep-set chest, with thick muscular legs. They can grow to 30inches tall and weigh as much as 140 lbs with a minimum weight of 99lbs for the females and 110 lbs for males. They can be mahogany, golden, fawn or a reddish-brown in color with limited white markings allowed. 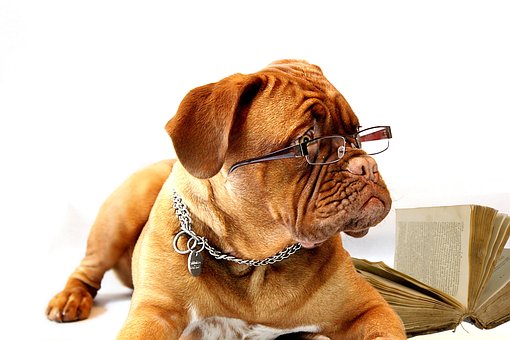 This dog is thought to pre-date even Mastiffs, and the Bull Terrier, although a uniform breed type did not exist until 1920, and it wasn’t until 2008 that they were given full recognition by the AKC.

They have had a troubled past with numbers reaching as low as 600 worldwide. Two of the biggest setbacks for the Dogue de Boudreaux were the French revolution, where the dog, who was popular with the rich and wealthy, perished with their masters, and the Second World War, it is said that Adolf Hitler demanded the execution of all Dogue de Bordeaux’s because of the loyalty to their owners.

They have since been on many T.V shows and films and this has helped increase their popularity and raised their numbers. They originate from France and were used for hunting on the French estates from the 12th century onwards.

Dogue de Bordeaux’s have a kind and overall well-mannered temperament, they are loyal and devoted to their families’, however, they are one of the best watchdogs so can be aggressive towards strangers.

For this reason, it is important to really socialize them well from a young age. Despite their fearsome appearance they can be very gentle and work well with other animals.

It’s important to remember though that they are a very strong dog so they need constant and consistent handling by somebody who is calm, yet has a natural authority over the dog.

They form strong bonds with the family, but if left alone for long periods of time they will associate this with a punishment.

Overall the Dogue de Bordeaux is a healthy dog, but due to their large size, they can be prone to hip dysplasia which should be screened for, and also heart problems. The female dog often has to have caesarian as they can have birthing problems.

These dogs require little to no grooming at-all, however a regular brushing, such as once weekly, wouldn’t hurt, and would help with removing any loose hairs, it would also encourage the dog’s natural productions of oils that protect the coat.

One thing to mention with the Dogue de Bordeaux is that because of their ‘wrinkly’ skin, you should pay special attention to these areas and wipe them with a wet flannel or cloth to clean them, it’s important to make sure you dry these areas thoroughly afterward.

The Dogue de Bordeaux can live in any size house or apartment, although they can appear placid and inactive while indoors it is important to remember they need to receive around an hour exercise a day, they also need a lot of mental stimulation in their environment.