The English Cocker, more commonly referred to as just a Cocker Spaniel, is a medium-sized dog that is well known for its long droopy ears and their almond-shaped eyes.

They have silky hair that is slightly wavy and can come in a huge verity of colors, from parti-colors, tricolors, roam, and solid colors (on a solid colored dog a small white mark on the chest is the only discoloration allowable).

They should have a defined stop, and a bright, intelligent expression. Cocker Spaniels are a compact dog and should have straight forelegs, tight ‘cat-like’ feet with plenty of feathering on their front legs. 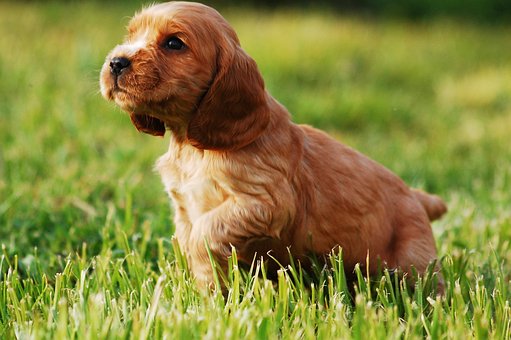 One of the oldest spaniel breeds, the Cocker Spaniel can be traced back to 14th century Spain, however, at this time all spaniels were categorized as being the same, then depending on their size used to either spring game or flush out woodcock.

It was these differences that led to the official separation of the breed into the Springer Spaniels, and the Cocker Spaniels in 1892, they also split the general ‘spaniel’ breed into other separate breeds that we know today.

During the 1930s the Cocker Spaniel became the most popular breed throughout the UK and remained so for almost 30 years.

The Cocker Spaniel is an intelligent and sturdy dog; they are loving, affectionate and excellent with children. However, A Cocker Spaniel is in fact a wonderful dog, they are gentle, playful and make some of the best companions. They are an outgoing dog, who when properly socialized, will easily take to strangers without any negative behavior.

Cocker Spaniels have an average life span of around 10-12 years which is just a bit lower than average for a dog of their size. The most common medical problems they can suffer from are skin conditions, cataracts, deafness (6%), heart murmurs, and benign tumors.

Due to their long ears, they can also be prone to a lot of ear infections and as with a lot of dogs they can also suffer from hip dysplasia. It’s worth noting that they are one of the handfuls of dogs that can suffer from ‘Rage Syndrome’, this is a genetic mental condition that can cause the dog to suddenly attack aggressively, after the episode though the dog will have no idea what has happened, as during these ‘rage attacks’ as they black-out mentally.

This is a rare condition and is mostly only found in show dog lines, it is thought that syndromes can be traced back to one dog, who won at the Westminster Kennel Club and went on to become a top sire.

Studies have shown that ‘Rage Syndrome’ occurs most often in the darker solid colored Cocker Spaniels, this is thought to be purely because these are the dogs most commonly bred for the show ring, and not actually a direct link to the color itself.

Cocker Spaniels need daily brushing to keep their coat in good condition and to keep it from tangling, however, most pet dogs tend to have a shorter coat than show dogs and are often clipped shorter.

If this is the case then you won’t need to brush the dogs quite so often. They do mostly need to be regularly trimmed to keep their hair to the optimal length wanted.

Cocker Spaniels will do well living almost anywhere, although giving them a good daily walk or run is required. They are an energetic dog and will happily accept all the exercise they can get, and then some more.