The English Foxhound is a large-sized dog who can be 21-25 inches tall and weigh around 65-75 lbs, however, show dogs tend to be bigger weighing anything up to 100 lbs.

They have a wide skull with a long snout, with sweet looking eyes. Their legs should be straight boned and muscular ending with tight cat-like feet.

They coat color should be black, tan and white, this can be either a mixed tricolor, just two colors together as a particolored or white with a combination of black and/or tan markings.

Their coat should be short, dense and hard, yet it should still appear shiny. They have low set ears that lie flat to their head and a long tail that should be set high. 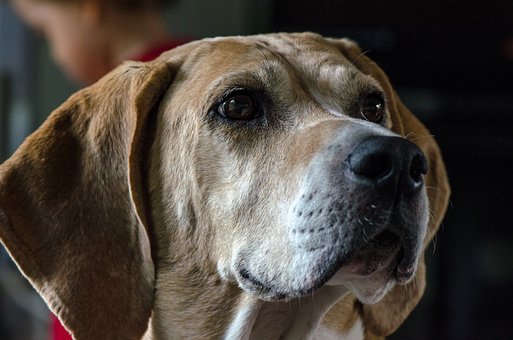 One of four types of foxhounds, the English Foxhound was developed in the 1500s in England under Henry the 8th. They are a mix of greyhounds – this was used for its speed, Fox Terriers – used for their hunting instincts and the bulldog for its determination.

The reason behind their design was due to the fact that numbers of deer were declining and the British nobles and royals, therefore, needed a new sport. Foxes were chosen so they set about designing a dog whose characteristics suited the job.

They have always been a dog that has been breed to hunt in a pack. They are currently a rare breed, with only 17 registered in the whole of the USA.

The English Foxhound is a courageous and passionate dog. They should be friendly with people a well as with all animals, they are obedient and love to run.

They can make excellent companions to their owners but due to being a pack hound they prefer the company of other dogs and get on well with horses and even chickens.

Wide-open spaces are what they love and so can become destructive if left in small spaces for prolonged periods of time. To own an English Foxhound you need a calm air of authority over the dog or they can try to become the dominant ‘alpha’ dog.

They also need a lot of exercises every day, its has been known for them to run constantly for 5-6 hours without stopping, however, once they reach around 7-8 years old they do start to slow down.

Health Issues. They are generally a very healthy dog, though a few issues that have been linked to the breed are pancreas problems, renal disease, and HD.

Due to the English Foxhounds short coat, not much work is needed to be done, they are an average shedder and so a quick comb or a brush with a firm bristle brush once and a while would be all that’s needed.

The English Foxhound would be happiest with acreage of land to run around in all day.

They are not recommended for apartment life unless their owner is an avid jogger or such as who can give them the hours of exercise they need each day.

They were breed to live on farms and estates and live with the animals, this is still the lifestyle that suits them best.