The English Springer Spaniel is a medium-sized, compact and robust dog. Their coat is medium-long in with feathering on the legs, body, and tail. The show and field dogs can look very different, show dogs have much longer fur and much more feathering and also have longer ears.

They can stand up to 18-20 inches and weigh between 50-55lbs, field dogs however often weigh less and are finer boned. They can come in many coat colors and those are, blue or liver roan, black or liver with white marks, or white with black or liver markings. You can also get tricolored, black and white or liver and white with tan markings.

English Springer Spaniels can be traced back to Spain in the 1500s. During this time all the Spaniels were grouped together in the same breed type and the same litters could produce more than one type of spaniel.

They were developed originally for springing the game for the net while hunting. They are nowadays used as gun dogs to find and retrieve game, they are also used as sniffer dogs, as their sense of smell is impeccable. 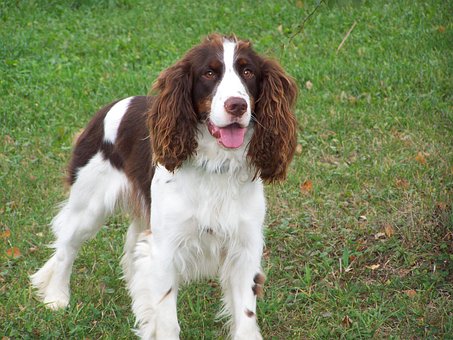 The English Springer Spaniel is a dog that loves to please and is very affectionate, they are also sociable and highly intelligent. They are easily trained thanks to the fact that they are obedient, willing, and quick learners.

They do, however, need clear structure and clear rules set out for them, without clear guidelines and plenty of mental exercises, and physical, exercise they can become frustrated and mischievous. They are also prone to becoming rather destructive and to bark a lot if left alone for too long.

The main conditions to affect the English Springer Spaniel are hip and elbow dysplasia, PRD (progressive retinal atrophy) which can lead to complete blindness and PFK, which is a blood disorder. They can also suffer from epilepsy and HD. A problem area to keep an eye on is their ears, due to the fact they have long pendant ears they are susceptible to ear infections and can easily become too hot. Their average life expectancy is 12-14 years.

Although there isn’t much difference between the field and show dogs, the show dogs need a lot more attention and daily brushing. Field dogs, however, only need to be brushed as and when they need it, it’s also worth regularly checking their coat for any debris they’ve picked up, from the field.

Show dogs need to be groomed more regularly due to the fact their coat is longer and softer, so will matt and tangle easier. Both types of English Springer Spaniels are average shedders and both will need their foot hair trimmed down regularly and should have their ears cleaned weekly to prevent infections.

The English Springer Spaniel can live anywhere but would prefer somewhere with a good-sized garden. They can adapt well to living anywhere though, and will even do well in a city environment. They are relatively inactive dogs while indoors, but they do need plenty of exercise such as a good run every day.