The Field Spaniel’s coat can be black, liver or roan. Their head and skull show high breeding and nobility. Their almond-shaped eyes have a gentle expression and are hazel in color.

They are a medium-sized dog that are longer than they are tall, standing at around 18 inches and weighing 40-55lbs. Their coat is long, flat, glossy and should feel silky to the touch. They have long pendant ears and have to feather on their chest, underside, legs, and tail.

However, once the breed was set up, as its own breed, it was bred with disastrous results to greatly exaggerate its length and weight which made it unable to work in the fields the way it had before.

Since then though, through carefully introducing Springer Spaniels and Cocker Spaniels back into their bloodlines they have returned to a moderate length and weight.

They are good at tracking, hunting, retrieving and being a watchdog, recently the number of Field Spaniels has increased but they are still considered a rare breed. 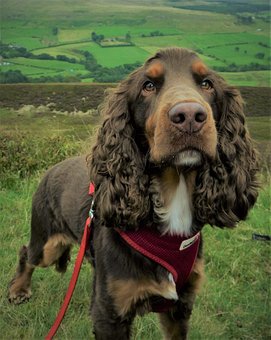 Field Spaniels are robust little dogs that have an easy-going manner and are very affectionate. They have a docile nature, are intelligent, but can have moments when they can be stubborn.

It’s important to socialize them well, from a young age or they can become shy and reserved, they are quick learners and love to have a job to do. An independent dog, but still enjoys the company of humans.

They can become neurotic if kept locked in a kennel. They are very playful and love to have somewhere they can roam.

They can be sensitive to negativity such as harsh words or a tough approach so it’s important to use a kind and consistent manner with them.

Due to the small number of Field Spaniels very little is known about any health issues of the breed. They are however prone to hip dysplasia and due to their long pendant ears, can suffer from ear infections.

They can also get entropion, where the eyelids turn in, which can cause the eyelashes to irritate the eye, and ectropion, often simply called ‘loose lids’, this is where the eyelids are too loose which provides a space for dirt and dust to collect causing frequent or continues eye infections.

A Field Spaniel needs regular brushing around once or twice a week; the ears should also be checked and cleaned regularly to help prevent problems.

Show dogs require more grooming than working, or pets, dogs. However, both need to be trimmed on a regular basis and be plucked to remove dead and loose fur.

Because of the fact that the Field Spaniel is a working dog they need plenty of regular exercises, so would do best with either an active family or a large garden that it can run around in, and explore.