The Finnish Spitz is recognizable for its bright red fur, they have a double coat with the undercoat being a lighter color than the longer and courser outer coat.

They have an almost fox-like face with pricked up ears, a narrow snout, and dark eyes.

They are square in appearance, a deep-set chest and profuse amount of fur on their tail which is carried curled up over their back.

They have rounded catlike paws and their dew claws are often removed.

They are generally between 15-19 inches in height with females weighing between 20-27 lbs and the males between 27-33 lbs. 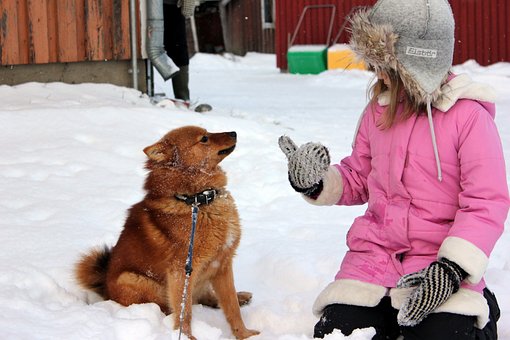 The Finish Spitz is the national dog of Finland, they are thought to have originated around 2000 years ago when they were brought, by a group of people living in central Russia, into Finland.

Due to the area where they lived, which was secluded, the breed managed to stay almost pure throughout the years and developed to the hunter’s needs.

They were first introduced to the UK in the 1920s and to this day they have remained relatively popular not only as working dogs but also as family pets.

The Finnish Spitz was used to hunt small game and would alert the hunter with a distinctive bark, it’s even been known for these little dogs to chase bears.

The Finnish Spitz is an affectionate and inquisitive companion, who loves nothing better than to be part of the family.

They can be lively and playful and do not fully mature until between 3 and 4 years of age.

They need to be socialized well, from a young age, or they can develop the habit of being aloof with strangers.

It’s important to train them well and to make sure that the dog knows it is not the one in charge, or they can become dominant and even aggressive.

They are loyal to their family and, due to their breeding, bark when they have found the game, they make excellent watchdogs alerting the family to trouble, however, they do not make good guard dogs.

Thanks to the careful and responsible breeding of the Finnish Spitz they suffer from very few health problems and are generally a fairly robust dog.

On rare occasions though they can suffer from luxating patella, which is when the knee cap slips out of position, epilepsy and hereditary cataracts.

They can also suffer from hip dysplasia and elbow dysplasia. Their average life expectancy is around 12 to 15 years.

The Finnish Spitz has an almost self-cleaning coat and only requires brushing around once a week.

However, they do shed seasonally for a few weeks twice a year, during this time they will need to be brushed daily to remove all the excess coat.

This process of removing the old coat will help the new coat to grow out in a better condition, also excess undercoat can cause skin conditions.

The Finnish Spitz prefers a cooler climate and can be relatively inactive indoors.

They can do well in an apartment but do need daily walks and plenty of attention.

They are well suited to family life and get on well with children and other pets.