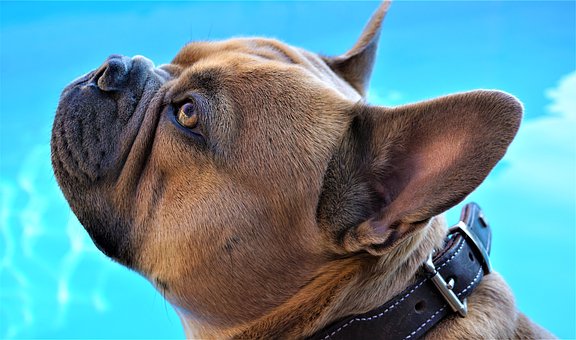 The French Bulldog is a stocky medium-sized dog standing 12 inches in height. The French Bulldog can enter into two different weight classes one is for between 19 and 22 pounds and the other 22-28 pounds, anything over 28 pounds is not normally allowed.

Their square large head accentuates their wide nose. The lower lip is covered by the hanging upper lip. They have prominent eyes that are round and dark in color. Their ears are broad at the base and narrow to make a triangle shape, with rounded tips.

The French Bulldog can have either a corkscrew tail or a straight one. It brought by these emphasized by a deep wide chest. Their coat is quite fine and short, being smooth to the touch. The skin around their head and shoulders is wrinkled and loose-fitting over most of the rest of the body. They can come in the color of white, brindle, or fawn, or combinations of these.

The French Bulldog, surprisingly enough, was developed in England in the 19th century in Nottingham. It was decided by some lacemakers that they would like a smaller version of the English bulldog. This entire class was driven to France by the Industrial Revolution in the 1860s and the dogs were taken with them.

These dogs also known as toy bulldogs were very popular with the French. They became commonly known as the French Bulldog and have remained so since, even though the English were not necessarily happy that the dog originating there had the title French Bulldog.

Their playful, lively, affectionate, and alert with an enthusiastic nature yet they are reasonably quiet and do not yap. They love to play and their sweet and curious disposition can be very entertaining.

The French Bulldog is very good with other dogs and plays well with them. Whilst they are easy-going and clever dogs, they do require firm training, without which they may become confused and aggressive.

The dog needs to know that you are the master and in charge. If they get the feeling they are in charge, undesirable habits will result. If adequately trained and socialized from a young age these will make a good family pet.

However, any children in the house must be considerate of the dog but also above it in the pecking order.

This breed lives for 10-12 years and is prone to spinal and joint problems along with eye problems and possible heart defects. It is not unusual for the puppies to have to be delivered by Caesarean section. This breed can have breathing problems if they become overweight so correct feeding is vital, do not overfeed this dog.

The French Bulldog sheds at an average rate beyond that regular brushing is available that is required for grooming this breed.

Whilst the French Bulldog does not like extremes of temperature, they are very active indoors and are well suited to live in an apartment. They will be happy enough without a garden, as long as they are well exercised during the day.