Description. The French Bulldog is a stocky medium-sized dog standing 12 inches in height. The French Bulldog can enter into two different weight classes one is for between 19 and 22 pounds and the other 22-28 pounds, anything over 28 pounds is not normally allowed. Their square large head accentuates their wide nose. The lower lip is covered by the hanging upper lip. They have prominent eyes that are round and dark in color. Their ears are broad at the base and narrow to make a triangle shape, with rounded tips. The French Bulldog can have either a corkscrew tail or a straight one. It brought by these emphasized by a deep wide chest. Their coat is quite fine and short, being smooth to the touch. The skin around their head and shoulders is wrinkled and loose fitting over most of the rest of the body. They can come in color of white, brindle, or fawn, or combinations of these.

History. The French Bulldog, surprisingly enough, was developed in England in the 19th century in Nottingham. It was decided by some lace makers that they would like a smaller version of the English bulldog. This entire class were driven to France by the Industrial Revolution in the 1860s and the dogs were taken with them. These dogs also known as toy Bulldog’s were very popular with the French. They became commonly known as the French Bulldog and have remained so since, even though the English were not necessarily happy that the dog originating there had the title French Bulldog.

Temperament. Their playful, lively, affectionate, and alert with an enthusiastic nature yet they are reasonably quiet and do not yap. They love to play and with their sweet and curious disposition can be very entertaining. The French Bulldog is very good with other dogs and plays well with them. Whilst they are easy going and clever dogs, they do require firm training, without which they may become confused and aggressive. The dog needs to know that you are the master and in charge. If they get the feeling they are in charge, undesirable habits will result. If adequately trained and socialized from a young age these will make a good family pet. However, any children in the house must be considerate to the dog but also above it in the pecking order.
Health issues. This breed lives for 10-12 years and are prone to spinal and joint problems along with eye problems and possible heart defects. It is not unusual for the puppies to have to be delivered by Caesarean section. This breed can have breathing problems if they become overweight so correct feeding is vital, do not overfeed this dog.
Grooming. The French Bulldog sheds at an average rate beyond that regular brushing is available that is required for grooming this breed.
Living conditions. Whilst the French Bulldog does not like extremes of temperature, they are very active indoors and are well suited to live in an apartment. They will be happy enough without a garden, as long as they are well exercised during the day. 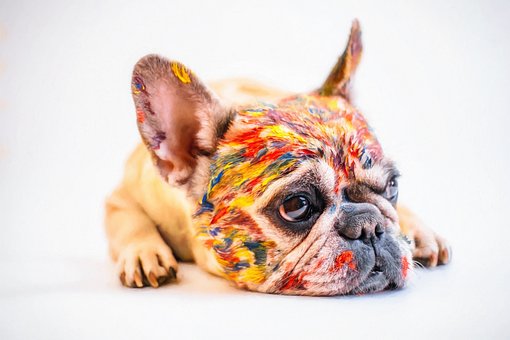 Description: Brief Background The French Bulldog breed originated in France. It is thought that this breed came to be from the cross breeding of a small type of English bulldog with other breeds. This breed was introduced to the American Kennel Club in 1947. Appearance The French Bulldog is small in size, but muscular and heavy boned. Their height is about 12 inches and their weight averaging around 28 lb. Their ears are set high, shaped with a bat-like appearance and their tail is short. They have dark and widely set apart eyes. Their coat is smooth to the touch and colors usually include; brindle, brindle with white, fawn, or white in color. They have a wrinkled face with a pugged nose.

Grooming: Very little grooming is needed. Regular brushings will do. This breed is an average shedder.

Origin: The French Bulldog was originally developed in England as a miniature version of the English Bulldog. In the 1860’s, French dog breeders imported some of these very small Bulldogs from Great Britain and bred them with French Terriers. Streetwalkers in France greatly admired the imports and this led to the name French Bulldog. When the breed was eventually brought back to England for exhibition, the English made a big uproar about the name French Bulldog, since the Bulldog was originally an English Breed and because the Bulldog was a traditional symbol of English culture.

Description: The French Bulldog, also known as the “Frenchie”, is a small, muscular, and compact dog. It stands about 12 at the withers and generally weighs between 18 and 28 pounds. It has heavy bones and is considered to be a dwarf Mastiff. The French Bulldog has a broad, square head, very short muzzle, and large bat ears. Its face is more pleasant and open than that of the English Bulldog and the wrinkling is not as heavy. The lower jaw is undershot and the tail is naturally abbreviated. The usual coat colors of the French Bulldog are brindle, white, brindle and white, and fawn.

History: It is generally considered that the French Bulldog began as a sort of toy Bulldog, a scaled-down version of the English Bulldog. It was kept by lacemakers in England. During the 1860s, these artisans were forced to leave England for France after being deprived of their livelihood by the industrialization of lace making. Their little dogs, of course, went with them to France. As the dogs gained popularity there, they became known as the French Bulldog. At this point, the French Bulldog had either rose ears or bat ears, this issue had not been settled. American devotees are responsible for establishing the bat ear as the breed standard.

Health Issues: As with all dogs, the French Bulldog is heir to several health conditions and congenital diseases. Von Willebrand’s Disease, a type of hemophilia, can be carried by this dog. A Frenchie should be tested before surgery to see if it has this condition. As the French Bulldog has such a flat face, it can suffer from breathing problems such as snoring. It is also intolerant of heat and must be kept cool to prevent heat stroke.

Grooming: The French Bulldog requires only a weekly grooming and plenty of petting to keep its coat in good condition. The facial wrinkles should be wiped regularly to prevent infection. The nails should be kept short and the ear passages clean.

The above information is strictly for information purposes only. Please do your own research to see if the dog breed, breeder or rescue organization is reputable and the right fit for you and your family.

Keep Checking Back For New Breeders and Rescue Listings.

Some of the Cities that we plan to include Puppies For Sale and Rescue Organizations are listed below. If you are located in this state and would like to be listed in our Breeder and Rescue Directory please contact us.

Important Note to Google and All Search Engines:
The Links above are placed here Free of charge and are not paid links.