Teacup Poodle – How Much, How Big, Rare Colors, Health Issues

Find out How much they cost, How big they get, What is considered a rare color, and What Health Issues they have.

How Big Does a Teacup Poodle Get?

The Teacup Poodle is a tiny dog. It’s smaller than the size of a Toy Poodle.

Teacup Poodle ranges in weight from 2 to 4 pounds.

It is a Toy Poodle if it is ten to 15 pounds when it reaches maturity.

A Teacup Poodle is one of the breeds that people like to dress up in different clothes.

Are They Hard to Groom?

They require to be constantly groomed in order to keep their fur clean from dirt and muckiness however, the time it takes to groom a tiny dog is minimal.

They’re groomed to get bows on their hair and are typically going to the salon for grooming services.

These dogs are delightful pets to be around as they don’t shed and enjoy the company of their owners.

They are intelligent, beautiful, sensitive, and stylish dogs. They are incredibly loyal and are mostly gentle with their owners.

They’re usually carried in lady’s purses or held as you walk.

They are always the center of attention and have become quite famous in Hollywood.

People love this breed due to its size and because they are able to take them wherever they travel.

How Much is a Toy Poodle?

They are considered to be somewhat rare breeds and their prices show this.

The cost of the Teacup Poodle can range anywhere between eight hundred to five thousand dollars. (That’s a rough estimate but yes $800.00 to $5000.00)

What Colors Do They Come in?

In the realm of breeding, training, as well as a dog show, the main element for the dog breed’s appearance is the numerous colors that they come in.

The American Kennel Club (AKC) offers standard poodle colors that are all based on the right genetic mixtures along with some oddities.

Find out more about the various poodle colors below, as well as the way each came to be!

Top 11 Poodle Colors including Rare and Hard to Find

1. Black – Most Common Poodle Color
2. Brown – Brown Poodles can Fade over Time
3. White – Very Popular Poodle Color
4. Blue – Really Color is a Deeper Shade of Silver
5. Silver – Require Two Recessive Genes – Can be Hard to Find
6. Silver Beige – Developed by Breeding Two Silver or Blue Poodles Together
7. Cafe au Lait – Result of a Fading Gene in Brown Coats
8. Sable – Isn’t a Color but Describes Poodles of different Hues with Black Tipped Hair
9. Cream- Rare Poodle Color that Requires a Recessive Gene as well as Specific Breeding
10. Red – Quite Rare and Vary in Shade. Usually have a Fading Gene that reduces Redness as they age.
11. Apricot – Rarest Poodle Color in the World. Comes from a Recessive Gene.

Why are Teacup Poodles so Popular?

The reason they are so popular is their size. Plus, they are easy to take care of.

Where did they Come From?

Their origins date back to centuries when Poodles were utilized in traveling circuses throughout Europe. They were utilized to entertain the crowd.

The first years of a royal life were awash with the popularity of performing Poodles and many were able to bring Poodles along with them on the court.

They quickly became highly spoiled pets, and this trend continues to be enjoyed into the present day.

How Big is a Full-Grown Teacup Poodle?

It is essential to take into consideration the size of the Teacup Poodle when selecting the Poodle as a pet for a family.

A two-to-four-pound dog is a highly delicate pet and one should consider carefully before adopting one of these dogs when there are children or children who are irresponsible within the household.

Teacup Poodles must not be higher than eight inches or weigh more than four pounds.

Do They Have Lots of Health Problems?

They are healthy as long as they are getting the proper nutrition through their meals.

Sometimes they will experience low sugar and a tiny amount of syrup on your finger can help with the issue.

However, if food is put in his dish during the day, there shouldn’t be any issues with the low sugar. Providing he eats! 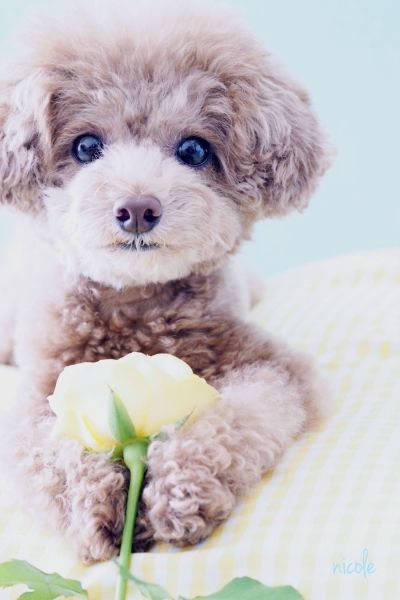 Is a Teacup Poodle Fragile?

Even though these dogs appear to be healthy, they are very fragile and delicate.

They are not able to climb off the sofa or bed and should be monitored carefully to ensure that they don’t fall off.

They could easily fracture one of their legs if they slide off of a mattress or sofa.

These dogs are for playing with and are a great conversation piece due to due to their small size.