Teacup Yorkie puppies should be easy to care for, right? They’re very small and require only a little exercise. You might be surprised to learn that although there are medical treatments available for teacup Yorkie puppies, they’re not always safe due to the dog’s unnaturally small size.

Teacup puppies aren’t a distinct breed. The smallest offspring of toy puppies (often the “runt”) is bred with another dog of similar stature. What people might not realize is that those unnaturally tiny dogs are often born with a host of congenital birth defects.

If the cost of a teacup yorkie puppy doesn’t scare you off ($2000 and up), the cost of maintaining your dog’s health might. Teacup yorkie puppies can live very long lives (12 — 15 years) if well cared for. However, the medical bills can add up very quickly. Before you know it, you’ve spent thousands and thousands of dollars!

As promised, here are some pitfalls of owning teacup Yorkie puppies. 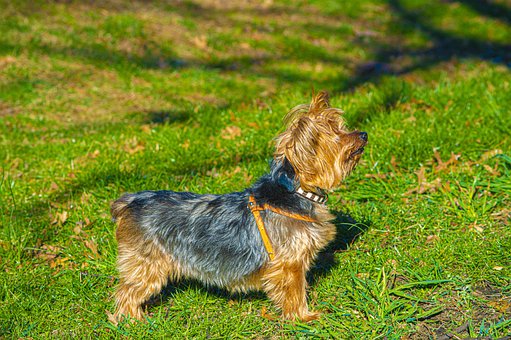 Hypoglycemia in toy and teacup dog breeds is an unfortunately reality. The problem is that these dogs are way too tiny to generate enough energy to keep themselves strong. All it takes is one missed meal, some over exercise, a cold environment or even parasites to bring it on.

Teacup puppies need to be fed frequently and consistently. That means you can’t extend meal-time by an hour or so. Whether you’re on the road, walking with your teacup puppy, or getting a dog sitter in to watch over him/her, it’s vital that food scheduling is kept consistent.

Free feed and measure as instructed on package. NOTE: Teacup puppies and toy dogs don’t have the same nutritional requirements. You might want to cut back on the dose normally given to a slightly larger dog. For top advice, check with the veterinarian.

When a teacup yorkie puppy doesn’t get food at the right time, his/her blood sugar can quickly drop to dangerous levels. Without that energy in the body, your little teacup could succumb to seizures, weakness, confusion, and collapse.

How To Feed A Teacup Puppy California Puppies

People are clamoring for teacup puppies and, as a result, breeders are scrambling to meet market demand.

One reason why teacup puppies are so riddled with health problems is because of the way they are bred. In order to create a breed of dog smaller than the standard “toy”, breeders have to mate the smallest dogs in a litter. The smallest dogs, or runts, tend to be the ones that have more health issues. When you combine the two, the resulting puppies are born in a somewhat weakened state, requiring diligent care.

Heart defects in teacup yorkie puppies are often congenital, meaning the dog was born with it. It takes a veterinarian to diagnosis heart problems in dogs. You may think you’re bringing home a perfectly healthy pup only to discover he/she has heart rhythm abnormalities, murmurs, or even signs of heart failure.

Although teacup puppies aren’t the only dogs at risk for collapsing tracheas, they are particularly vulnerable.

Any dog can suffer from seizures and there are a variety of reasons for them to happen. Teacup Yorkie puppies, however, may have seizures as a result of some of the health problems indicated in this post.

Seizures in teacup puppies is usually due to hydrocephalus (water on the brain), liver shunts, and hypoglycemia.

Signs of seizures in teacup Yorkie terriers include:

Breathing problems in dogs are caused by any number of issues. Obesity, allergies, bacterial and/or viral infections, and brachycephalic dogs can easily suffer from respiration problems.

Teacup dogs, however, have unique risk factors that lead to a high number of dogs with breathing problems. Respiratory issues in teacup dogs can often be traced back to some of the congenital problems mentioned above.

Heart disease, tracheal collapse, weakness, obesity, and allergies can all be culprits.

Teacup puppies may develop pancreatitis which is chronic inflammation of the pancreas. The pancreas becomes inflamed when its normal secretions turn on itself and attack the pancreas.

Signs of pancreatic disease in teacup dogs include

Risk of dehydration is present for any dog (no matter the size) suffering with vomiting and diarrhea. However, teacup puppies will dehydrate at an alarming rate and must be treated ASAP.

Their tiny bodies can’t hold much food or water at any given time. Therefore, it’s important to keep a strict schedule around that. If your dog plays particularly hard on a warm day, he/she will need to drink more to keep ahead of dehydration.

This is a fancy term for severe diarrhea. This isn’t something that just comes on and last a few hours. If your teacup yorkie puppy develops gastroenteritis, medical attention is a must.

The dog must not become so dehydrated that he/she is beyond the saving point. A veterinarian may be able to provide liquid IV along with the proper electrolytes to prevent death.

What’s known as a “liver shunt” is actually the opening in the liver that the mother used to filter her puppies toxins. This happens in utero and the hole closes over after the puppy is born.

Unfortunately, this doesn’t happen in all teacup puppies. The opening leaves them unable to adequately remove their own toxins from their little bodies.

You can scoop up a teacup puppy in the palm of your hand and wonder how they could ever suffer from a single pain. A patella luxation occurs when the knee doesn’t sit properly in the groove and slides out of position.

This is particular problem in toy and teacup dogs leading to pain, difficulty walking, and can eventually lead to arthritis in the joint.

Learn the proper way to massage a Patella Luxation in Dogs here. Keep in mind that the suggestions are designed for a much bigger dog. Do not attempt this type of massage without first consulting a veterinarian for advice.

Teacup puppies are so unique and fragile that it doesn’t take much to make a bad situation even worse. Be careful.

Hydrocephalus is a condition known as “water on the brain”. Teacup dogs are prone to this genetic condition and, unfortunately, breeders aren’t able to detect which ones will develop it and which ones wont.

Teacup puppies suffering from hydrocephalus can develop brain damage and can die. In more severe cases euthanasia is the only option.

Hydrocephalus is a build up of cerebrospinal fluid. The fluid builds in the skull, effectively forcing pressure against the delicate brain. There are treatments for dogs with hydrocephalus; however, the risks of surgical procedures in teacup puppies is very high.

Teacup Yorkie puppies are prone to broken bones for a number of reasons. They’re unusually tiny dogs and don’t have the normal bone density of larger, stronger dogs.

If you have children, or other animals in the house, tiny teacup puppies can easily be stepped on accidentally. These little 3 — 4 pound dogs can easily get underfoot.

In addition, teacup terriers play hard and fast. They’re a little like windup toys on steroids. Without proper safety gates and attention, these little guys can find themselves with broken bones.

Are You Looking to Buy a Teacup Yorkie Puppy?

Congratulations! If you’ve read this whole post and still want to buy or adopt a teacup yorkie puppy, then you’re obviously ready to take on the challenges.

Will every teacup dog develop these diseases? Not always. In reality, teacup dogs usually have some variety of the health issues noted above. Some are mild and treatable and some are severe requiring medical intervention.

At the end of the day

Make sure the dog you bring home (whatever the type) is going to be a good fit for your family and lifestyle. Teacup yorkie puppies are adorable, but they’re also a handful.

Having a teacup puppy in your house means paying special attention where you step and where your dog is allowed to roam.